The “Emscher Umbau” project is a unique river restoration project. The timeframe and budget are mind boggling: 30 years of planning and construction, 4.5 billion € total budget to date.

The river runs through one of the most densely populated areas in Europe with long industrial heritage. It’s a project for a whole generation.

One of the tributaries entering the Emscher (by Emscherblau )

There are a few other projects in major cities, for example in London and Seoul, which uncover ‘lost’ rivers but the Emscher is much bigger in scale.

Because of subsidence caused by mining, underground conveyance of sewage was not an option for a large portion of the catchment of the Emscher. To manage the water, the Emschergenossenschaft was founded in 1899 and started regulating the river system and converting it into a network of open sewers.

The restoration project came about in the early 1990s. The declining coal mining industry finally enabled the piped conveyance of wastewater underground. The goal was to make the river sewage free. Surrounding cities pushed for a more attractive river without the smell of sewage. A modern country like Germany was no place for an open sewer.

The project is seen as a huge chance for the region to showcase it’s ingenuity and industrial heritage.

It was a bold, but controversial move.

Several industrial and mining companies, as members of the Emscher association, weren’t happy about the decision. The current system was cheap, and it worked. And even within the technical team of the association the plan was controversial. Famous engineers like Dr. Gunter Annen were convinced the Emscher was not able to be restored.

But the cities prevailed and the restoration is now nearing completion.

The beautiful headquarters of the Emscher Genossenschaft (by Maschinenjunge)

The sheer number of projects within the overall restoration, the long duration and huge budget make the success even more impressive. The comparably expensive construction of the new Berlin Airport is a much easier project by comparison and the costs exploded and opening date have been pushed out by 9 years already.

The governing body of the whole river system is the Emscher Genossenschaft. It is an association consisting of, and funded by, the polluters themselves. These are the surrounding cities with their urban runoff and sewerage and the industries that produce wastewater needing disposal. They all have a say in the annual meetings and in the governing board of the association. The more polluted water they produce, the more votes they get.

The majority decides about how the budget gets spent and which projects to focus on. This system was one of the earliest river basin management associations and served as guidance for many more to come. The powers within the association have been shifting. The declining industrial polluters contributed to the rising power of the cities to get their priorities acted on.

Due to the novel territory of river restoration at the time and the huge scale of the challenge, the project is run in an adaptive approach by necessity.

Now, continuous learning is part and parcel of the project. Near the wastewater treatment plant in Dortmund-Deusen a trial area was reconstructed on 1200m of river. Four different landscape treatments are tested and monitored to see how the river behaves when the concrete is removed. Learnings can then be applied to the actual restoration of the river.

Because there was no precedent for a project of this scale, the association needed to continually change course, such as reducing the number of treatment plants needed from six to four in the planning phase, Ketteler said.

Restoration of one tributary (by Stefan Kunzmann)

Building major infrastructure in such a densely populated area was a challenge. 51 km of new wastewater pipes needed to be drilled next to the river in up to 40 m depth. To maintain the pipes they were built in duplicate, so access is possible through the pipe not in use.

Four brand new biological wastewater treatment plants were built as part of the project, treating the water of 1.8 million people.

Giant pump stations had to be built to move the water to those plants. The biggest is under construction in Oberhausen and will pump 15,000 l/s with 10 pumps.

To mitigate flooding, new rainwater retention basins were built along the canal and in cities. For the biggest one at the Holtener Bruch a retention volume of 1.6 Million m³ is planned. The area is then replanted and the river can move freely within the basin.

The small creeks leading to the main river channel have already been restored and the central concrete lining removed where the pipes are completed. Reclaiming space for the river within the constraints of the existing urban fabric and maintaining flood protection are the biggest challenges for the next few years until completion.

To ensure that the best outcome is reached, all reconstructed sections of river are monitored for chemical, biological, physical and morphological status. This means measuring concentrations of pollutants, counting species of water organisms, measuring erosion and the movement of sediment and more.

There are cooperations with universities and the German environmental protection agency to make the most of the findings from the project and to ensure compliance.

I spoke to river basin manager Dr. Mario Sommerhäuser in Essen, who highlighted the successes: “We measured 170 different species in 1990 and now we are at 450 different species. These plants and animals migrated into our restored sections of river. You can say there are already three times as many species in the river. And we aren’t even finished yet.”

The Groppe, one of the species now thriving in the restored catchment. (by Hans Hillewaert)

They even found a species of fish, that was thought to be extinct locally, in a remote section of the river. The fish had changed in appearance over the years of isolation and is now called the “Emschergroppe”. The restoration will now enable the fish to return to the whole river.

The monitoring is crucial to the adaptive approach to the project and will hopefully continue after completion in 2021. 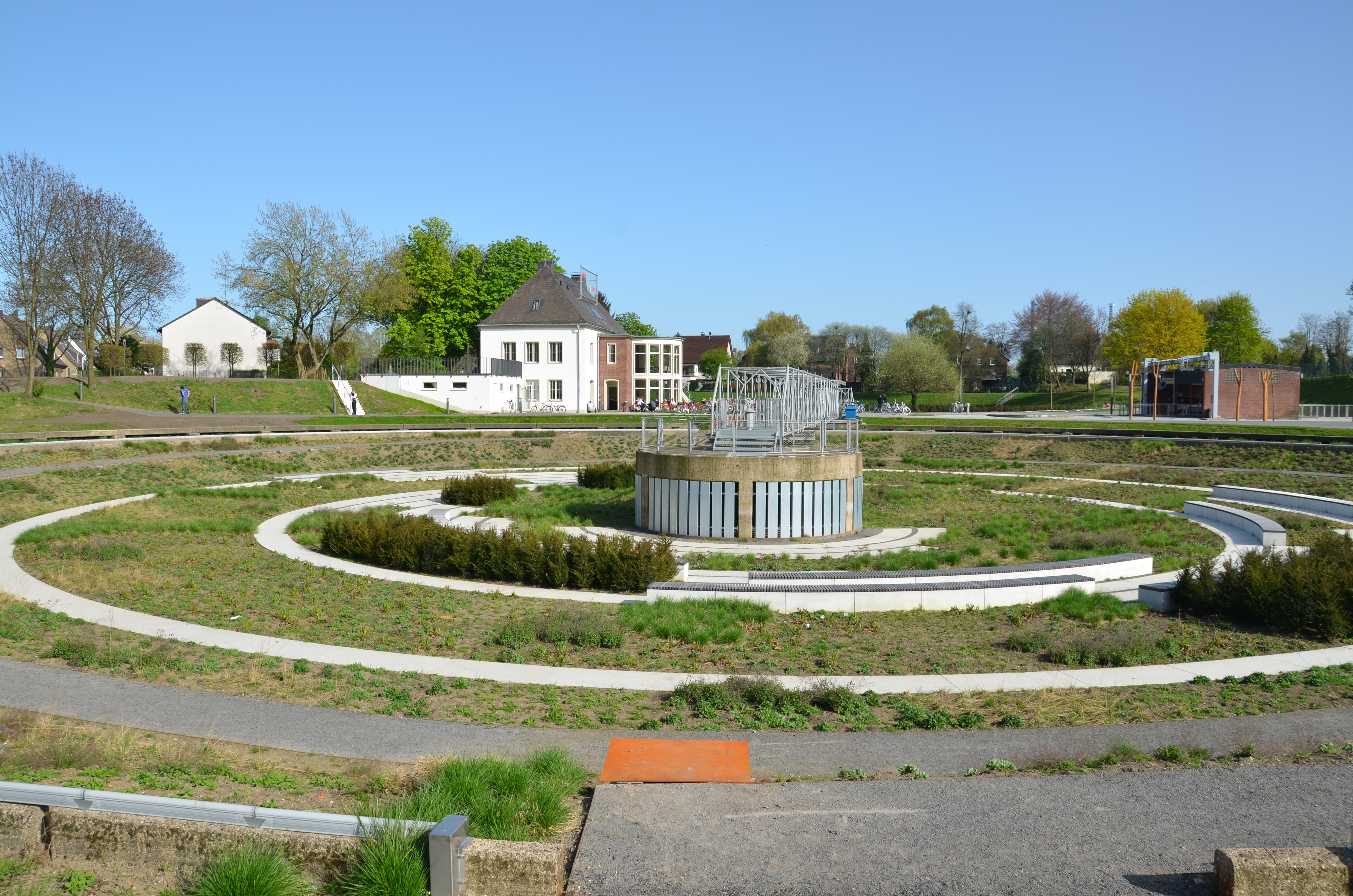 The restoration project was also part of the international architecture exhibition Emscher Park  seeking to address the structural changes in Germany’s “rust belt” after the decline of a lot of the heavy industry in the area.

In addition to the impressive engineering feats, the inclusion of artists, local apiarists and winemakers are meant to raise the profile of the restoration project according to Dr. Sommerhäuser. Local school groups are engaged and cyclists are encouraged to explore the restored river. 180 km of bike and walking paths have been constructed already. The Bernepark in Bottrop is an example of a art and recreation highlight in a re-purposed wastewater treatment plant.

A deal with the future

Most wastewater is collected together with rainwater in a mixed sewage system in the existing underground infrastructure. This leads to oversized pipes and sewage discharges in extreme rainfall events.

To minimise these emergency discharges into the restored river, the Emschergenossenschaft is developing a system to separate the wastewater and the rainwater in the pipes.

But the separation won’t be enough. To help reach the ambitious targets set by the Emschergenossenschaft and the European Water framework directive the member cities decided to strike a deal with the future.

The original deal  is to infiltrate 15% of the rainfall locally until 2020. Therefore minimising the needed pipe sizes for future repairs, replenishing the groundwater and reducing emergency discharges of sewage.

Then in 2015 the association launched  “Water in the city of tomorrow” to promote and fund projects taking an integrated approach to water management.

I was impressed with the boldness of the project and the adaptive approach taken. Cross-institutional cooperation is never easy. But with a project of this scale and duration the progress is very impressive. Our institutions are not set-up for a “learn as we go” approach to construction. That it is possible, is shown by the Emscher restoration project.

Especially the continuous monitoring is often not implemented but so crucial to learning from new approaches and I hope that similar requirements are funded and promoted by the environmental protection agencies in future projects.

I loved the approach that the river is free to develop a natural meander within the constraints of existing channel. However, I think the new design of embankments along the restored river could be improved to better serve as a transition zone between the natural system of the river and the urban area on either side.

The bike paths on top of the embankments are a great initiative. The embankments themselves though are designed in a very engineered, linear fashion on the renders and a more organic touch would definitely ‘soften the blow’ a bit. But that could just be the next step in the adaptive process! That is the exciting part.